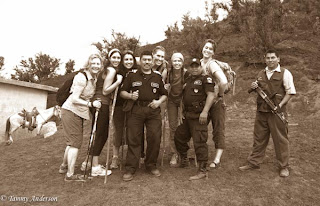 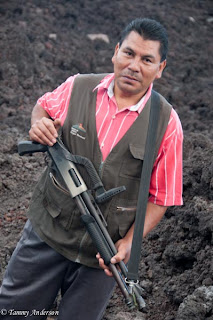 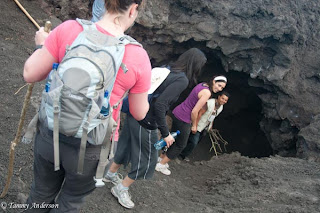 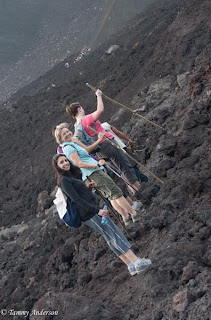 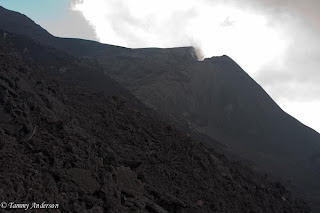 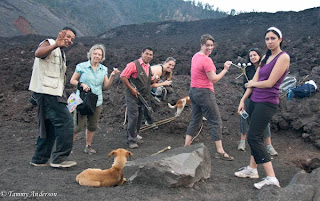 Our adventure to Volcan Pacaya began bright and early with a 6am pickup at our hotel. By 7:30am, we had arrived at the base of the volcano and rounded up our guide.  In August, I had hiked Volcan Acatenango without security, and was later told that I was fortunate that nothing had happened to me. As the information about when and where recent banditos were operating seemed inconsistent, I thought I'd error on the conservative side, and make special arrangements for a couple of officers to accompany the team. However, our security personnel were nowhere in sight.

So, in the absence of security, we recruited Juan Antonio, a national park officer with a ginormous machine gun, to join us on our hike. At approximately 5'10" tall, Juan Antonio exhibited a great big smile, even spaces between his upper teeth, a healthy size belly and a willingness to adventure with six American women to the top of a volcano he had yet to see.

Once we'd purchased walking sticks from a young boy, our journey began on a trail comprised of rich, dark, volcanic soil and lava rocks from the recent May 2010 eruption. Our entourage continued to grow, as three horses and their riders and one dog escorted us as well, in hopes that we might need their services.

Soon our path consisted of nothing other than a field of lava rocks, and with each footstep the temperature varied as heat emanated from behind certain bolders. At the end of the trail (we weren't actually going to summit as steam poured out of this active beast), we stopped to roast marshmallows over a small, narrow crevice. The highlight was entering a large steam vent, cave like structure. To the few of us who regularly enjoy hot yoga, this humid space felt like home. After snapping a few pictures while striking our favorite yoga poses, we ventured out of the cave and down the mountain.

To our surprise, half way down the volcano, we were joined by our two missing police officers! Apparently, their vehicle had broken down and they were late to the meeting point. Since they insisted on escorting us, our company had now expanded to six American women, one guide, one Juan Antonio with a giant machine gun, one rabies infested dog, and two police officers.

The story only continues to get better, as we loaded up our van and began our journey to a thermal spa for part two of our day. Approximately 40 minutes into our drive, we noticed that two police officers had been following us since we left the volcano. Our driver commented that this was quite strange, although he didn't look concerned. The police proceeded to follow us into the spa parking lot and parked.

Five hours later, we emerged from our thermal pool circuit, eucalyptus steam bath, relaxing massage, and cocoa/coffee bean body scrub into the parking lot. To our great dismay, the police truck was still sitting outside the spa, near our van. Our driver quickly dispelled any fears, by telling us that he'd spoke with the officers and we were not to be alarmed. With a great big smile spread across his face, he told us that the chief of police had ordered the men to stay with us the entire day and not to leave our vehicle until we had returned safely back to our hotel in Antigua. It was one of the strangest things our driver had ever seen.

As we began to make our return to the hotel, the police truck promptly followed us and used his lights and sirens anytime traffic stalled or it looked as if another vehicle might pull out in front of us. The 45 minute adventure back to Antigua culminated when we came upon an accident. Another police truck happened to be sitting perpendicular to the street on which we were stopped. The police vehicle behind us flashed his lights at him in apparently some kind of secret code and now, we had police escorts at our front and our rear. Shortly, one of the officers exited his truck, approached the accident, and motioned for a large bus to move. When the officer returned to his vehicle, the lights and sirens danced and sang again, and we moved seamlessly past the accident. We all cheered and couldn't believe our good fortune, as the backup looked as if it'd last for hours.

Furthermore, the previous Saturday evening, as we were leaving the airport in Guatemala City late at night, we also noticed a police truck following us. As we pulled up to our hotel at almost midnight, a policewoman stood guard outside our van, as we unloaded our personal luggage and many bags of donations. This was also seen as quite strange by our Safe Passage escort, and she later found out our airport escort occurred as a result of being mistaken as French tourists.

Were both these situations mere coincidence and just plain luck? I don't know, but I do know that many friends and family back home were praying for our safety. Personally, I view my journey in life through a lens of divine mystery, and I don't believe in coincidences. Either way, God certainly had his hand of protection over us on this trip and it made for quite an entertaining adventure!
Posted by Team Eastlake in Guatemala at 7:09 PM